The film of the day: Benedetta by Paul Verhoeven

Be careful, Verhoeven is coming! Expected in Cannes for two years, his Benedetta was strategically programmed this Friday, July 9, just to give festival-goers a boost, showing the first signs of fatigue, and to raise Cannes fever just before the weekend. This portrait of a 17th century lesbian saint, divided between sexual drives and mystical ecstasies, has all the ingredients for an archetypal Cannes scandal, between scenes of unbridled ass and sardonic anticlerical anarchism. When Paul Verhoeven arrives in Cannes, he always makes sure that no one is bored. If he was surprisingly never in the 70s to present his Dutch arthouse hits, type Turkish Delights, no one forgot the shock Basic Instinct, in 1992, and the instantaneous crystallization of the myth Sharon Stone, nor Elle, in 2016, which had allowed Isabelle “Zaza” Huppert to begin her triumphant march towards the Caesar and the Golden Globes. A fiery provocateur, Verhoeven is above all a huge director of actresses, who has so far never seen one of his actresses win a Cannes Interpretation Award. Will Virginie Efira, who gives her all here in a fairly acrobatic role, break the curse?

The star of the day: Matt Damon for Stillwater (out of competition)

They did not all come but him and there and there. While rumor has it that Vin Diesel and Alicia Vikander, supposed to come accompany Fast and Furious 9 and Blue bayou, will not tread the Croisette, Matt Damon responded. After having already climbed these steps for two Soderberghs (Ocean’s Thirteen in 2007 and My life with Liberace in 2013), he landed last night almost in the regional stage. Because it is in Marseille that the action of the Stillwater by Tom McCarthy (Spotlight) that he carries – with Camille Cottin – on his shoulders in the role of a widowed father who arrives in the Marseille city to get closer to his daughter who is imprisoned there and that he will try to get acquitted. An Eastwoodian character in a Taken-like atmosphere with an obligatory passage through the Vélodrome stadium, site of OM’s exploits. Unconditional fan of Olympique Lyonnais, Thierry Frémaux was magnanimous enough to select him.

The trend of the day: the cow and capitalism

Andrea Arnold and Kelly Reichardt did not keep the cows together but the two directors seem to share a passion for these bovines. Chance of the calendar, the docu Cow (Arnold) was presented this Thursday in the new Cannes Première section, while First Cow (Reichardt) will land on July 9 on the Mubi platform. Two milking parlors, two atmospheres: on one side, Andrea Arnold places his camera as close as possible to a cow in an English farm, to make us experience the animal’s insane life cycle and its daily horror (update down, separation from the calf, milking … and we start again until death). On the other, Kelly Reichardt takes us to the beginning of the 19th century, in Oregon, where a cook and an immigrant prick the milk of the cow of a wealthy landowner, to make delicious honey cakes and thus launch their business. If they treat it in radically different ways, it is on the theme of capitalism (generator of absurd violence on animals for one, original sin for the other) that the two filmmakers come together. It remains to be seen if Featured (another cow movie in Cannes!), screened on July 12 at Acid, will definitely make us vegan.

The sound of the day: Heroin of the Velvet Underground

“ I have made the big decision / I’m gonna try to nullify my life. “Sang Lou Reed in the unmissable Heroin. Fifty-four years after the release of the first Velvet Underground album, the hit resonates in Todd Haynes’ documentary (I’m Not There, Velvet Goldmine, Dark Waters…) dedicated to the group, and presented in preview on the Croisette. A patchwork-shaped film with assumed Warholian influences, stuffed with crazy archive footage that tells both the rise and fall of the Velvet, while painting a portrait of the bubbling cultural New York of the 1960s. project, the figure of Lou Reed – whose extracts from interviews and the fixed gaze in split-screen punctuate the feature film -, self-destructive leader running after the ultimate art. A (in) search of identity for which Haynes summons the survivors to comment on the past (John Cale and Maureen Tucker, the drummer), while the founding ghosts (Andy Warhol) roam the halls. Very beautiful mausoleum, as chaotic as it is immediately attractive: just like the Velvet, in short.

Quote of the day: Virginie Efira

“My first memory of Verhoeven?” Basic Instinct. I had bought all the papers on it … It was a time when, if I can afford something gritty, we had less access to sex scenes than today. It was in my parents’ video library, I went regularly to see the first ten minutes … “

The revelation: the trio of The hill where the lionesses roar

Luàna Bajrami has found three amazing actresses to embody the young robbers of his first feature, The Hill where the lionesses roar (Fortnight). Each has its own style, as in Funny ladies : Era Balaj the solar sassy, ​​Uratë Shabani the reserved orphan and Flaka Latifi the trainer with all fire and flame charisma. Well, the film, the debut feature of its 20-year-old director, isn’t perfect at all, but its trio of Kosovar superheroines is unforgettable. We already miss them.

Cannes 2021: The Hill where the lionesses roar, a promise [critique]

Interview of the day: François Ozon, Géraldine Pailhas and André Dussollier for Everything went well

Hot shot of the day: it’s raining in Cannes

Between the nicely polished films, the security guards more and more looking at the sanitary pass and then the real hot spots, those which make the most resistant journalists waver, we started to falter … But at the beginning of the afternoon, the fleet descended on this poor festival, as if to wake up all these beautiful people and clean the city. Soaked journalists, disheveled stars, torn umbrellas and panicked security guards … On the Marriott Terrace, the junket of Everything went well d’Ozon has started. And for a moment, we said to ourselves that a film had never been so badly named. The storm turns the promotional panzer into a surreal barnum. And then, as if the weather of the day had rebooted everything, once the sun came back, we did a series of exceptional films: a Pietro Germi from 1950 at Cannes Classics, the doc H6 of Ye Ye (Yeah!) and the bombshell of Joachim Trier, Julie (in twelve chapters). This one, we’ll talk about it again tomorrow, time to dry off.

The slap of the day: The path of hope by Pietro Germi (Cannes Classics) 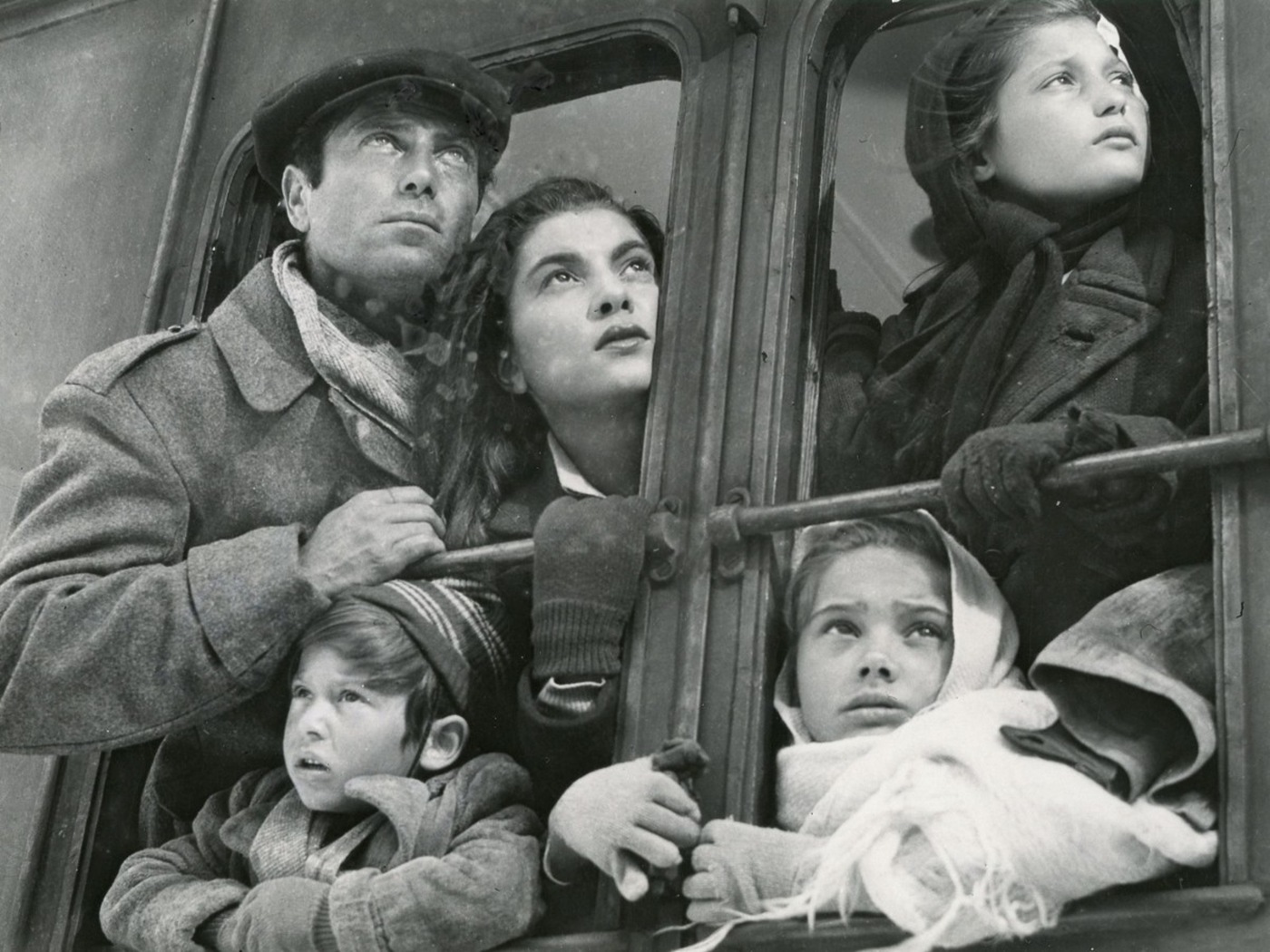 We did not know it, but the Italians also had their Grapes of Wrath. Directed in 1950 by Germi, a forgotten genius of transalpine cinema, this astonishing film begins in a small village in Sicily. Framed as in a masterpiece of Russian formalism, women dressed in black wait in silence for their underage husbands to come to the surface. They have nothing more to lose, nothing to eat; they are on strike. When the accountant comes down to tell them that fighting is no longer useful, like the Joads in the Ford film, some will choose to cross the country to an illusory promised land, France. Everything is there: the community spirit, the fight against injustice, and above all uprooting. Written by Fellini and Pinelli, played by a troupe of amazing actors (including a sublime Raf Vallone), the film is propelled by a movement of generosity, and never by an ideal of revolt. Rather than the beauty of political speeches, we find here the savagery of the characters in love, the purity of innocent children, and this kind of impulse for justice which agitates Vallone. Delivered from the traps of reality which has sometimes plagued some neo-realistic classics, this odyssey of hope is a universal masterpiece which quietly rises to the level of the marvels of Renoir, Ford and Kurosawa. Just that.

French box office of December 7: Encanto stands up to Ghostbusters: the legacy

Dune: Benjamin Millepied choreographed the walk in the desert