The film of the day: Petrov’s Fever (Official selection in competition)

The plot of the new film by Kirill Serebrennikov (to whom we owe the beautiful Leto) can be summed up in a few sentences: in a city in Russia, we follow a few days in the life of Petrov, a garage mechanic and amateur comic book author. He is married to Petrova, a librarian and they have a son, Petrov. The New Year’s Eve is approaching and a nasty flu virus is spreading from one family member to another… Put like that it all seems clear and relatively simple. But Serebrennikov sets about blasting everything from the first scene. He mixes the most unbridled phantasmagoria and the most prosaic reality; the cacophony of the world results in an overload of props and extras, or in exhausting theatrical flights … Petrov is feverish and very alcoholic and the scenes of dreams or nightmare gradually nibble the course of his day. While on a bus, he is suddenly invited to participate in a firing squad in the street; a little later, he finds himself with a corpse on his arms… What is true? And what comes from his feverish delusions? For her part, Petrova is subject to murderous impulses and the slightest drop of blood plunges her into states of violent excitement …
Yesterday we were talking about Sergei Loznitsa’s film on the Babi Yar massacre and it was another film by the Ukrainian filmmaker that we were thinking about last night, A sweet woman. Serebrennikov’s film unfolds a hallucinatory fresco on Russia and its old demons in a series of outrageous scenes, filmed in mind-blowing sequence shots. It is sometimes difficult to follow, sometimes totally incomprehensible, yet this surrealist stroll ends up describing a universe of absolute alienation, the causes of which seem to go beyond history (the Soviet heritage or post-Soviet disarray) to become metaphysical. .
And it is in a clearly allegorical final segment that everything comes together. Petrov’s past comes to the surface and contaminates the film. In a sumptuous Black and White, the filmmaker then tells about another New Year’s Eve, with a child Petrov …
Messy, crazy, talking all the time about death or decay, this film is paradoxically constantly nourished and crossed by an extraordinary vitality.

Star of the day: Wes Anderson 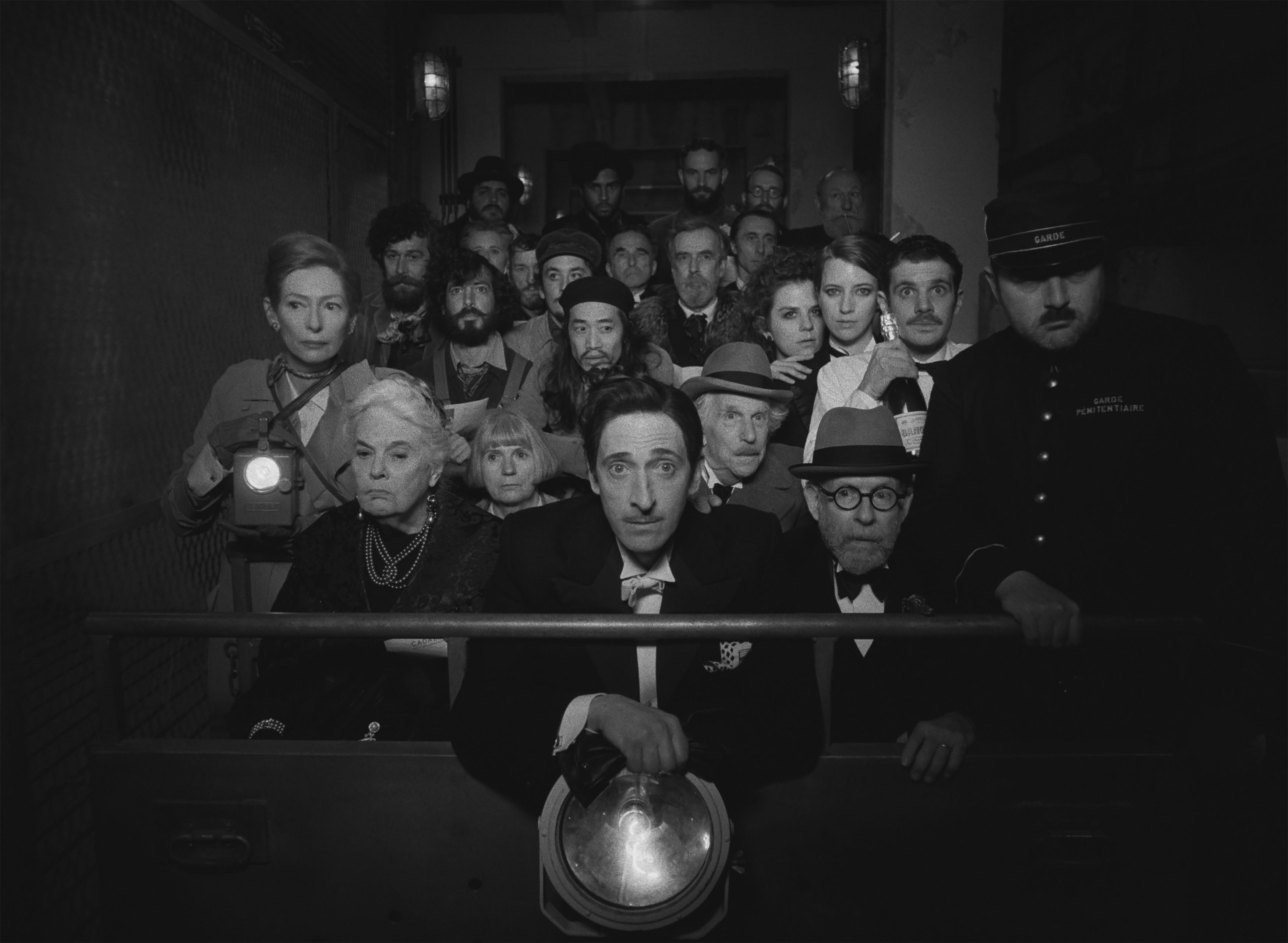 Who is the real star of The French Dispatch ? Bill Murray, absolute tutelary figure of Wes Anderson’s cinema, playing here the chief editor of the fictitious newspaper staged in the film? Tilda Swinton? Benicio Del Toro? Maybe more Timothée Chalamet? Or then Adrien Brody, Léa Seydoux, Frances McDormand? Unless it is Mathieu Amalric, Denis Ménochet, Lyna Khoudri, Willem Dafoe, Henry Winkler? Impossible to know where, and especially who, to start, when it comes to sorting through the hallucinatory areopagus of famous faces that parade in the credits of the last Wes Anderson. Because in reality, the star, the real one, the one who hovers above all the others, it is Wes Anderson himself, who delivers here a more Wes-Andersonian film you die, a degree further than The Grand Budapest Hotel in the monomaniac, compilatory and millimeter delirium. The French Dispatch is at the same time totally terminal in its ambition of self-sufficient film-world, and traversed by some of the most compelling gags and poetic ideas seen by its author for a long time. Refreshing and airtight at the same time. Closed circuit but also wildly welcoming. In short: wes-andersonissime.

The revelation of the day: Bruno Reidal by Vincent Le Port presented at the Semaine de la Critique.

Since in Cannes, it is good to (over-) sell in a few words a film to raise the sauce, let’s say that Bruno Reidal by Vincent Le Port is a film by Robert Bresson gore, the story of a (almost) criminal country priest. Obviously, this teasing means everything and nothing – “gore” should not be pushed! – but it turns the temperature up a notch (doesn’t it?). Also hovers the specter of Michel Foucault (there, it is squarely the sauna on the Croisette!) Who was impassioned in his time for another young killer from the French peasantry, Pierre Rivière. Rivière in 1835 cut the throats of his mother, his sister and his brother with a pruning knife. In the wake of his arrest, he wrote a forty-page memoir on which Foucault went into ecstasies, then the filmmaker René Allio who made a magnificent film in 1976. Close the ban, here is Bruno Reidal which tells almost the same story, again with a first-hand account of extraordinary power. The filmmaker Vincent Le Port, whose first feature film is, signs a film of an almost divine purity that contrasts perfectly with the bubbling interiority of the young man prisoner of his death instincts (white voice-over and serious A death row inmate escaped de Bresson – we’ll come back to that). God is never absent and Bruno Reidal, who was then studying as a seminarian, constantly turns to Him to try to understand what is happening in him (Bernanos is not far either). So here we are with a crushing film that did not deserve to be loaded so much. So, we immediately forget Bernabresson and Foucallio and we dive without thinking into this purifying cold water!

The scene of the day: the assault on Bac Nord (Cédric Jimenez, out of competition)

In BAC North, the cops of the BAC of the northern districts (title perfectly fitting with the history, one does not take us in traitor, first good point) of Marseilles cross the yellow line. Cédric Jimenez is inspired by this true story to make a muscular and explosive detective thriller, wonderfully embodied by Karim Leklou, Gilles Lellouche and François Civil. In a rather insane scene – of which we will not reveal the ins and outs – the latter two disembark through the roof of a building that hides a drug lab. Guns bark, bullets fly through hallways and partitions, as tensions rise and bodies pile up. Fifteen minutes of guerilla cinema, which never blushes before American standards. A great moment of rough and raw action, which makes the film a kind of (distorting) mirror of Miserable by Ladj Ly, with whom North Bac would make a perfect dual schedule. Patience, it happens quickly: release scheduled for August 18 at the cinema.

The trend of the day: ecology

In the red of the red carpet, Cannes 2021 has decided to add a touch of green this year. With a double first. An amount of 24 euros to be paid at the time of accreditation to compensate for the pollution generated by the event. And the creation of the “Cinema for the climate” section combining fiction and documentaries alerting to current dangers or celebrating solutions. A few days later Bigger than us, produced by Marion Cotillard, docu in the right lineage of Demain, the latter’s co-director, Cyril Dion, was today in the spotlight with Animal, this time produced solo, where he warns about the extinction of many species and calls for a better cohabitation between human and animal world, through the prism of two teenagers engaged in this struggle. This same idea of ​​the salvation that will come from the only youth facing deaf and blind adults on the issue is also found at the heart of La Croisade, the new realization of Louis Garrel, presented last night in the same section. A delightfully childish utopian comedy, his very first film intended for a young audience where the couple he forms with Laetitia Casta is overwhelmed by their son who takes matters into his own hands to save the world with the comrades of his age, in starting with Africa. But if the new world seems to be being written on the Croisette, the old one is still moving… going up the Croisette, last night, we could hear the FF9 cars tumbling down full throttle on the big screen of the Cinema de la Plage. The art of contrast in all its splendor.

Song of the day: The House of rising sun by The Animals in Medusa (Directors’ Fortnight)

With its hallucinatory soundtrack and poisonous colors, Medusa, the horror thriller by Anita Rocha da Silveira electrified the Directors’ Fortnight. The film has everything to please fans of neon, in a desperately pastel Cannes program: Marina, 21, and her gang of bigoted young girls, hunt and stalk infidels at nightfall before setting out in search of ‘a saint with a burnt face. Morbid, creepy and political, this anti-Bolsonaro pamphlet is the postcard (full of antrax) that John Carpenter would send us if he spent his holidays in Brazil with the cinematographer of Dario Argento. We also owe to Medusa the most unhealthy recovery of The House of the rising sun for a lease. The timeless hit of The Animals is ransacked here by a choir of fundamentalist Brazilian women who transform it into an evangelist propaganda song to the glory of the housewife. Scary.

Image of the day: the absence of Kirill Serebrennikov

Army of Thieves: “It was interesting to offer Jonathan Cohen a role against the job”